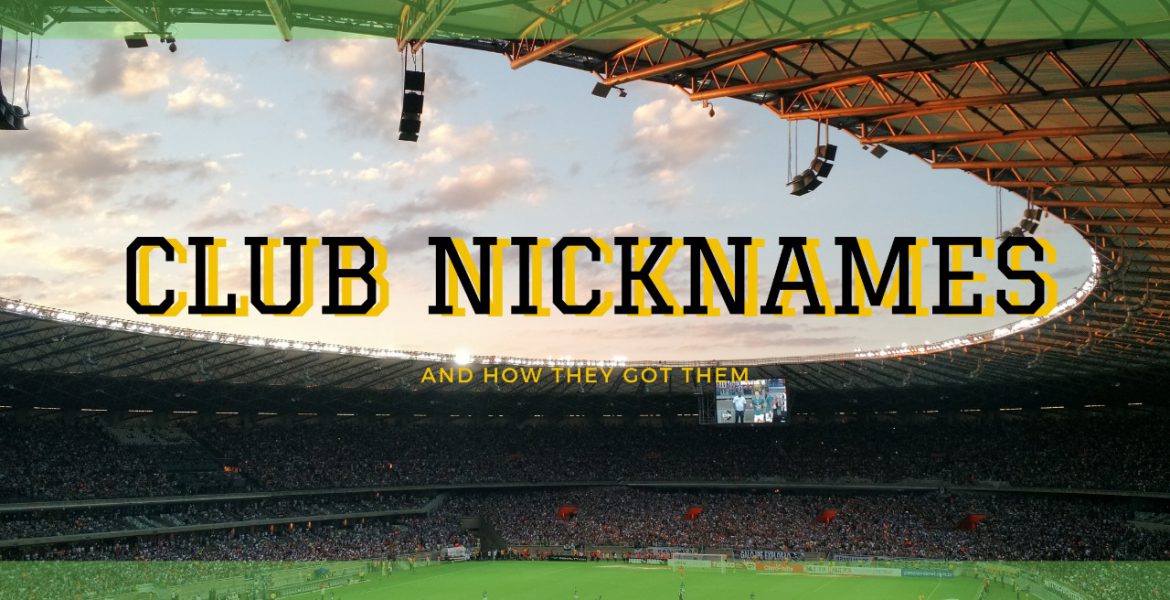 There are many clubs in Europe who have made a place for themselves among the top clubs in the World. They create moments, which becomes legacy and then history. And over all these years, they associate with many other names and adopts a nick name.

Thus here are 15 clubs’ nicknames and how they got it.

Manchester United are famously refereed as ‘The Red Devils’ as they have even incorporated the name in their logo as well. But do you know how they got the nickname ?

It all date back to when Sir Matt Busby was the coach of Manchester United. Sir Busby took charge of the team in 1945 and rebuild the team by showing faith in lot of young players . The young team tasted great success and were nicknamed as Busby Babes .

But following the disastrous Munich Air Crash in 1958 which killed 23 people on board the name Busby Babes seemed inappropriate. However Sir Busby who was one of the survivor was the person to come up with the name Red Devil.

In 1934 a rugby team from Salford, England went to France and similar to Manchester United, their young talents out shined in the tournament. Thus a Journalist ended up describing the team as ‘Les Diables Rouges‘ translated as The Red Devils. Thus Sir Busby decided to adopt this name in 1970 as the name sounded intimidating for opponents than a cute babes.

The Catalonia club Barcelona was founded in 1899, but till 1922 they didn’t have a proper stadium to play in. Thus in early 1900 Barca used to play in Camp de la Indústria which had a capacity of mere 6000 supporters and was surrounded by a long wall on one side.

Thus to manage the overcrowding of supporters, people started sitting on the walls of the stadium to view the match. So for the by-passers on the road, they could only see the back or bottoms of the people thus they started calling Barca supporters as Cules. Which translates to Buttock in Catalonia.

In 1922 Barcelona build a new stadium, ending the culture of wall sitting , but the name Cules remained with the club forever.

Juventus is the most successful club in Italy, yet they are refereed with this unusual name. It all started with a joke as Juventus means ” Youth ” in Latin and ironically they are the 3rd oldest club in Italy. Thus the notion of old got attached with the club.

Another notion was that Juventus in 1930’s had a habit of buying old age players, thus the word ‘old’ was used for them .

The Word lady was derived when immigrants from South Italy who moved to North Italy started loving the club as they would love their better halves. Thus jokingly the word ‘Old Lady’ stayed with Juventus.

While the primary nickname of Real Madrid is ‘Los Blancos’. Which means white in Spanish, resembling their kit color. However there is another nickname which isn’t known much by non Spaniard fans and that is ‘Los Merengues’.

Merengue is a famous desert in France, it was one fine day when a french gastronomist saw a match of Real Madrid dawning their traditional white kit. The person drew similarities between the kits and the french desert, thus described Real madrid as ‘the Merengues’.

Food is an important part of Spanish culture. Thus it was the Spanish journalist Matis Prats Cañete who liked the name and made it popular in his radio commentaries.

The translation of the Spanish word Colchoneros in English means ‘Mattresses’. Now why would a team be nicknamed and called as the mattress makers ?

Well, the story behind it is that post civil war era, the traditional mattresses in Spain back then were covered in Red and white, drawing similarities with the kit of Atletico Madrid. Thus from then on the team went on to be called as The Colchoneros.

The adoption of the name dates back to 1886, when Arsenal was formed. Because the workers who formed the club used to work for arms manufacturing company, they started calling themselves as gunners and even their club badge features the cannon.

Though there are many teams who play in red and are refereed as The Reds such as Manchester United, Nottingham Forest. But it’s Liverpool FC who are primarily called as The Reds. It is due to their kit color as red displays Power and Danger.

Tottenham are officially called as Tottenham Hotspur, but where did they get the Hotspur from ?

A group of cricketers, passionate about sports decided to start a football club in 1882. They named it as Hotspur FC.

The name Hotspur was actually inspired and derived from Shakespeare . Yes it was a play by William Shakespeare,where a fiery character called Henry who owned land in Tottenham. He was a brave personality who died while fighting a battle. But his legacy remained and he was nicknamed as Henry Hotspur, because he often went riding wearing spurs on his boot.

Thus the club was named as Hotspur FC. But due to its similarity with another club named Hotspurs, they added a prefix ‘Tottenham’ to their name. Thus the club became Tottenham Hotspur.

Chlesea FC were called the Pensioners untill 1950 because of their association with Royal Hospital in London. The hospital was mainly for War veterens who were Pensioners. Chelsea till date saves 8-10 Seats for the pensioners.

However the nickname eventually was used in a derogatory manner for the club by the rivals. Thus Chelsea decided to drop the name and were simply called as the Blues, because of their blue Kit.

Ever wondered why Borussia Dortmund are called BVB and even their logo has BVB written on it ?

Well, the club likes to stick the nativeness with themselves. As the club’s original name is Ballspielverein Borussia 09 e.V. Dortmund.

Whereas the further classification of the name is Ballspielverein meaning Ball game club in English. 09 for the year they were founded in, that is 1909. e.V is the legal status or the association they belong to. While Dortmund is the region they belong to in Germany.

Thus, they use B for Ball, V for verein and B for Borussia. And are called as BVB.

Dortmund doesn’t call them as BVSB because it doesn’t rhyme with heir club chant.

La Beneamata translates to the ‘The Cherished One’ in English. Inter Milan is generally called as ‘Nerazzurri‘ because of their shirt color. But the term La Beneamata is associated with Inter because they are one of the biggest clubs in the world. They have won many titles which include 18 Serie A title, thus they have rewarded themselves with the nick name of ‘The Cherished one’.

A.C Milan are simply referred as ‘Rossoneri’ because of their Red and White stripes kit.

Manchester City is moderately a new member among the big clubs, and hence they lack history and nicknames. But still to mention one they call themselves as ‘The Cityzens’. Its a word play as the name City with Suffix of -zen, makes the supporters as citizens of the club.

The club is simply called as ‘Die Roten’ which means The Red in German. It is a reference to the Club’s Red Kit.