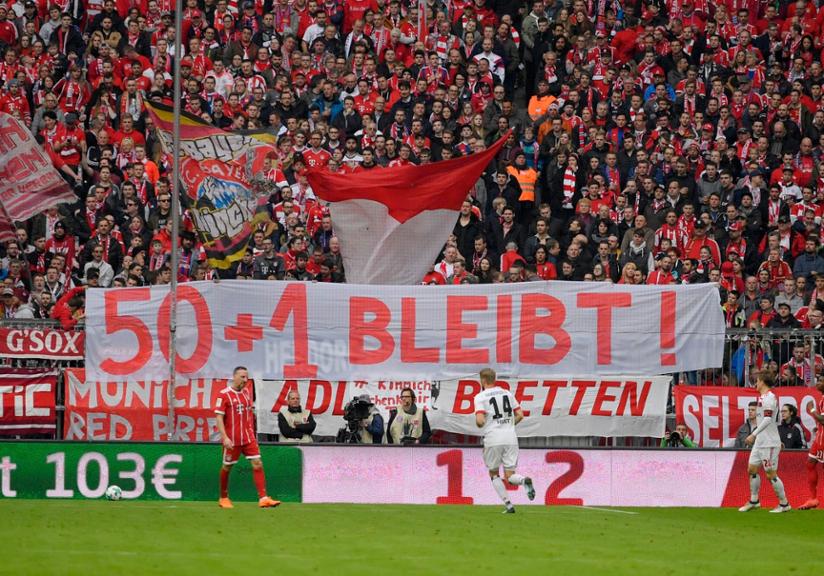 The German Fans and the curious case of ’50+1′ Rule

Fans play a huge part in any sporting event. They are often referred as
the 12th man and Germany certainly knows how to regard their fans.
Here is The German Fans and the curious case of ’50+1′ Rule.

In German football one will see that they have the highest attendance ratio in the world .

German football is known to have a special connection with their fans.
Thus even the lower ranked and small teams have more average
attendance than some of the biggest teams in England. Like Manchester
City whose half stadium remains empty.

Another reason of good attendance in German Football is low ticket
price. They offer the cheapest price range among the top 5 leagues in
the world.

But how is it that that German football maintains such a good relation
with the fans ? Well the answer is the ’50+1′ rule.

’50+1 ‘ is a rule by the German football federation which states that the
club must hold majority of voting rights that is ’50 +1’ stakes in the club
among themselves. The rule basically state that a club’s voting and
decision power must lie among their own members and the fans.

The Rule has been instated so that unlike other leagues, foreign investors
don’t take over the club and commercialize the club by renovating it to
work for profits instead for the welfare of the club.

As per the German federation, fans are a part of the club and they must
have a participatory say in the club they are emotionally invested to. Thus
the fans have right to vote for the new president, they can veto for
revocation of any change that was made towards ill health of the Club.

The ’50+1′ rule helps the local talent grow and the roots of the club
remains sane. A team is allowed to compete in Bundesliga only if their
members and fans jointly hold more than 50% stake in the club.

How did it started ?

Prior to 1998, Clubs were run for non profits. Thus they were exclusively
owned by the members. However in October 1998, the German Federation
allowed the clubs to go private with a mandatory ’50+1′ rule to follow.

German clubs refrain from Foreign Investment. Because they push for
profits and not promote the game, thus it also sees hike in ticket prices.
English league is prime example of commercialization and privatization of
football as majority of the clubs have foreign investors.

If you look at the example of English club Cardiff City, the club was
bought by Vincent Tan, a Malaysian tycoon. He brought immediate
changes to the club. With changing of the traditional blue kit to red and
the logo to that of a dragon from a bird. The fans felt a lost of identity
with the club and were unhappy.

Though the changes were annulled following a massive protest by the
fans.

But in order to prevent the German clubs from losing their identity and
face such situations, the rule has been placed. Though with every set of
rules comes exceptions and This rule is no exception.

The German federation keeps a check that no club should have a
investor holding majority stakes. However, the exception is that if an
investor has invested in a club for more than 20 years, then that individual
or company can own more than 50% stakes in the club.

The clubs who have benefited from the exception are :-

Employees of German pharmaceutical company Bayer founded the club in 1904. They have invested in the club for more than 20 years. And thus they own more than 50% stakes and have rightfully inherited the decision making rights.

This is the reason Leverkusen are not allowed to use Bayer in their name.
Otherwise Bundesliga have a strict policy that no commercial company
can have their name in the team’s name.

In 1945 VfL Wolfsburg was founded. Just seven years after the city itself
was created to house Volkswagen workers busy assembling the famous
Beetle car. Thus constant investment from 1945 have exempted the club
from The rule.

3. Why is RB Leipzig the most hated club in Germany ?

Red Bull founded RB Leipzig founded just 11 year ago in 2009. A lot of
football fans and even a layman would consider RB to stand for Red Bull
Leipzig. But its not.

Though Red Bull wanted to name the club after the energy drink, but as
per Bundesliga rules a club name can’t be based on a sponsor. Thus as a
marketing strategy Red bull named the Club as Rasen Ballsport Leipzig. It
just means Lawn ball Sports and has no direct relation with football. They
just wanted the club to be acronym-ed with RB and for fans to have a
misconception that RB means Red Bull ,in which they succeeded.

But the real question is despite being just 9 years old and Red Bull being
its sole investor how did the club got entry into the league ? Didn’t they
violate the 50+1 rule ?

Well, the answer is no

They didn’t violate the law, but they found a loophole in the 50+1 Rule. Red
bull on paper holds just 49% ownership and the remaining majority stakes
lies among the club members. Now They very cleverly raised the subscription fees to enormous expense. Hence the fans are unable to
become members of the club due to expensive tickets. Thus unable to hold any voting right with the club. Adding on ,the total strength of the club’s board members are 17. Yes just 17, and all the 17 members are Red bull employees. Thus the whole club’s operation is basically under Red bull itself.

By being the most privatized club in whole Germany and disregarding the
fans and 50+1 Rule, RB Leipzig is the most hated club in the world. But they
at least got wingssss.

After seeing the success of other leagues after getting privatized, the Rule has come under radar. But when it came to voting and each club deciding the fate of the rule, then the rule retained in power after 32 teams voted in favor of the rule out of 36 teams.

Even teams like Hannovar 96 and Hoffenhiem were exempted after their investors completed 20 years. But were rejected by the federation seeing that they prompted the scrapping of rule.

Whatever be the criticism of the rule, it still is one of the most applauded rule worldwide. As it regards their fans, who are the backbone of each club without any subscription fee.