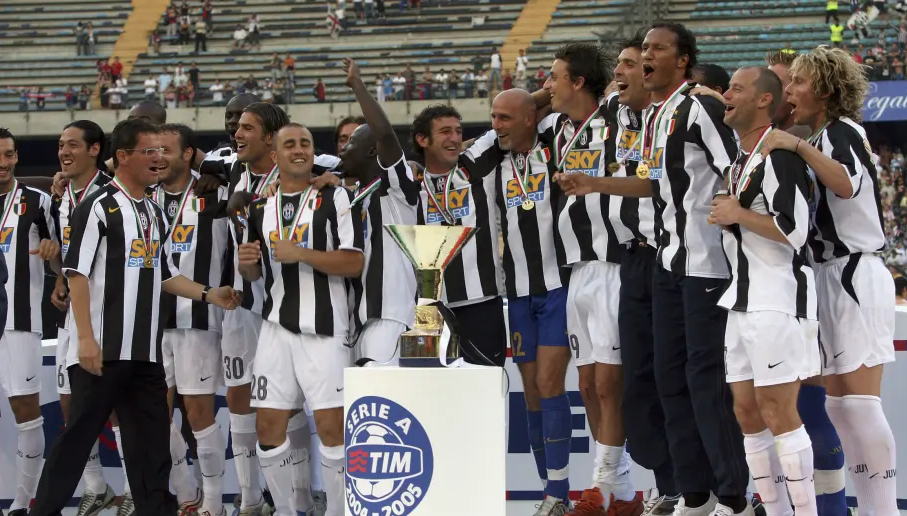 Calciopoli is a term associated with the match fixing scandal of 2004- 2005 Serie A season.

To understand Calciopoli , one must be familiar with certain terms and names.

Juventus had won their 29th Serie A title in May 2006. However, the celebrations was short lived. A local newspaper in Italy printed transcript of suspicious extra friendly telephonic talking of Juventus General Director Moggi with Refereeing Designator Head Pierluigi Pairetto.

The news attracted many readers and became a talking point among the media. During this time, FIGC confirmed that they have received the audio tapes. TIM had recorded the tapes, who also happens to be the title sponsor of the league.

FIGC after investigation concluded that Juventus have been found guilty. They were guilty of influencing and buying the referees as per their liking in 2004-2005 season. Hence, Juventus were stripped of their 2004-2005 title and the title wasn’t given to any club. While for the then current 2005-2006 season, Inter Milan were handed the title.

The investigation also reveled that the FIGC received audio tapes of 4 more teams- Milan, Lazio, Florentina and Reggina. However these four teams weren’t involved much in the events

4. Role of Inter Milan in Calciopoli ?

Juventus was the only team who appeal against their verdict, The Old Lady’s accused Director Moggi revealed that Calciopoli did happen. But on the other hand, why did Inter Milan get a clean chit and were not punished?

Inter Milan played a very crucial part in the happening of the scandal. Milan and Juventus ruled the 90’s era and even the early 2000’s. However, Inter last won the league 17 years ago in 1988. Therefore, Inter created the scandal to remove their rivals and here’s how.

There’s no doubt that Calciopoli took place and teams like Juventus, Milan did buy the referees. But its also a proven fact that Inter Milan’s President Massimo Morrati talked to the referring designator and fielded bribed referees for their matches. The tapes of Inter Milan were not published in the press. Moreover, were never leaked by TIM and FIGC .

With the media pressure mounting on the FIGC. Their President quit his post. Guido Rossi stepped in to take in charge of the board and the then current investigation. Rossi happened to be Inter Milan’s Vice president .

Imagine a rival team’s Vice President investigating a case against ones team. Rossi immediately declared punishments for the rival clubs. And 2005-2006 season title was given to Inter. Inter won after a gap of 17 years and thus went on to win 5 consecutive league titles there after .

Soon after delivering his verdict against the guilty clubs, Rossi resigned from the post of President. He then went on to become President of TIM, the telecom title sponsor company who exposed the whole scandal. Inter’s move was well set to safely secure those audio tapes.

In 2010, tapes of Inter were released. All due to Moggi’s effort. The then FIGC head confirmed Inter’s involvement but did not revoked their 2005-2006 title .Listening to the verdict, the then Juventus Director filed a case in arbitration court. The case is still pending in the court waiting for a verdict.

In conclusion, Calciopoli doesn’t raise much eyebrows however Inter not getting punished is what does. The scandal left a big dent on the league from which they still haven’t been able to recover from. Serie A’s reputation, fans and big players went away from Italy and thus the
scandal changed the Italian football forever.

Scandals in football kills the spirit of the game. Following the scandal the image of Italian league got ruined.

It was not the only scandal that happened in football, but certainly the biggest in recent times. These scandals overshadows the efforts of fair play by other teams.

It was a dark phase for Italian league and fans. big players also left the league. The league also saw a decline in its view.